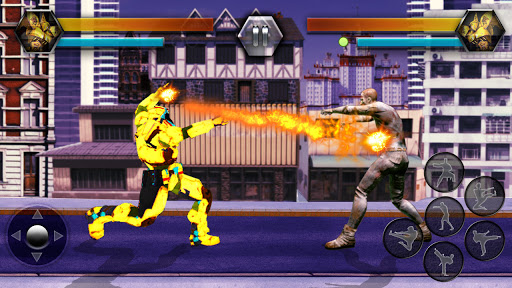 In this robot fighting game, counter the zombies as karate professional. Make sure you have the abilities’ to hold Kung Fu karate champion title against challenger fighters. It’s one of the best platforms to become pro legends fighting champion among the different world karate fighters. Start your kung Fu fight & epic war and chose the character from the gallery, target zombies beats em up in real martial arts action game. Show your epic war style while punching, kicking, or using super flicks cleverly to become the fighting master. Fight against deadly zombies and monster rivals, upgrade fighting robots to beat up more enemies with super kicks and super punches. Hold your position just like legend fighting style waits for the enemies’ move and control your speed, power with accuracy to complete & win the dragon fighting round. This heroes war is all about accuracy, especially how to kick enemies? And most importantantly the response of the opponent pro fighter by the attack. So chose the hero robot and start fighting against zombies in this epic action-adventure game. Customize your dragon karate fighting champion style and defeat them badly. In this legend fighting and adventure, you have the best opportunity to become champion just defend yourself with blockage skills. Show ultimate actions and take timely decision to attack with ninja combat moves, response with super punches, uppercuts, and kicks on proper time and accuracy to enjoy ultimate karate shadow champions’ game. So what are you waiting for? Let’s continue offline fighting kick show with thrilling Kung Fu & taekwondo fighting style. Its one of the best fighting games to become karate legend.
This super kung Fu game contains stunning graphics with the best animations that will never let you bored at any stage. In this karate fighting challenge, you have to strike with touch screen controls that make jab, uppercut, and hooks. This extreme action adventure fierce punches and combo’s game have multiple enemies with several heroes to fight. Beat all the challenges and win to become the super fighter against masters. Show robots super ninja actions and super moves against daring enemies. Use special fighter moves and powers to knock enemies’ energy rapidly. The beautiful high-quality environment increases your fighting passion. Challenges will be continuously updated. So let’s play and give us your valuable feedback.