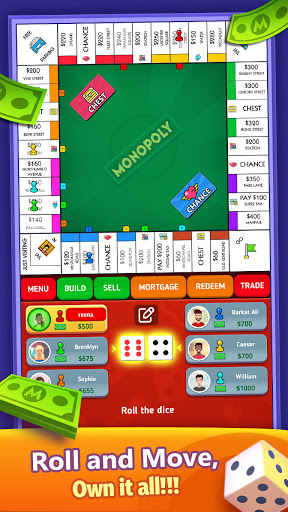 Monopoly is the well-loved and classic board game for all ages that lets you acquire property and compete with friends to obtain more money.

Monopoly, real-estate board game, in which the player’s goal is to remain financially solvent while forcing opponents into bankruptcy by buying and developing pieces of property.

The objective of the game is to be the last player remaining with any money.

Monopoly is a great game for 2 – 6 players. It is a board game where players roll two six-sided dice to move around the game board, buying and trading properties, and develop them with houses and hotels. Players collect rent from their opponents, with the goal being to drive them into bankruptcy.

Money can also be gained or lost through Chance and Community Chest cards, and tax squares; players can end up in jail, which they cannot move from until they have met one of several conditions. There are other places on the board which can not be bought, but instead require the player to draw a card and perform the action on the card, pay taxes, collect income, or even go to jail.

Play against the computer, against your friends in Local Multiplayer or with millions of Monopoly players around the world in Online Multiplayer Mode.

You can also create Private Rooms and invite your friends to play in Play with Friends Mode.

Monopoly is a game of buying, selling, banking and mortgaging etc. So play and prove yourself the wealthiest person. This game is an absolute entertainer! Play it with family or friends and never feel a dull moment again.

Monopoly is a game of luck, strategy, and people skills. No strategy will guarantee you a win; that’s one of the reasons, Monopoly is so interesting.

If you’re not satisfied with the luck you’ve been given, why not try and increase your odds of success in our Monopoly game?
What are you waiting for? Download Monopoly today for Free and have hours of fun with friends and family!!
◆◆◆◆ Monopoly Features◆◆◆◆

✔ True multiplayer where you can play with real people online in online multiplayer mode.
✔ Adaptable intelligence with smart AI when playing against computer
✔ Create Private Room and Invite Friends and Family
✔ Play with players across the world
✔ 2, 3,4,5 or 6 Player Mode
✔ Play with Local Multiplayer

Please don’t forget to Rate and Review Monopoly, we aim to make it one of the best board games out there.

Any suggestions? We always love to hear from you for making this game better.