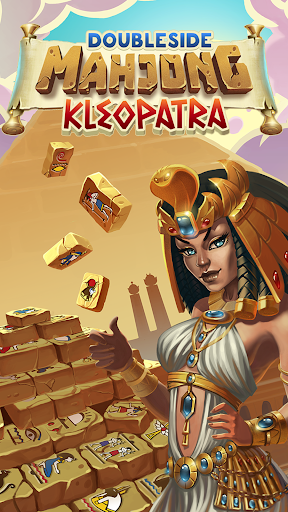 Let the adventures in Egypt begin. Complete the map to unlock all levels. Double Mahjong Сleopatra Pro is a fully three-dimensional and familiar to many of you Mahjong Puzzle in which Egyptian hieroglyphics have replaced the Chinese one.

The player’s goal is to find the same blocks, gradually clearing the pyramid until there is no blocks left on the screen. In Doubleside Mahjong are available both regular pyramids and special doubleside pyramids, which can be rotated using swipe, clearing the blocks on both sides.

Imagine that now you can rotate the pyramid and clear it not only from the front but also from the back side. This is a completely new approach to your favorite game, just try to play a couple of minutes and it will be impossible to stop. You will find over 150 new free levels of doubleside and standard pyramids, ethnic music and background panoramas of the Egyptian pyramids.